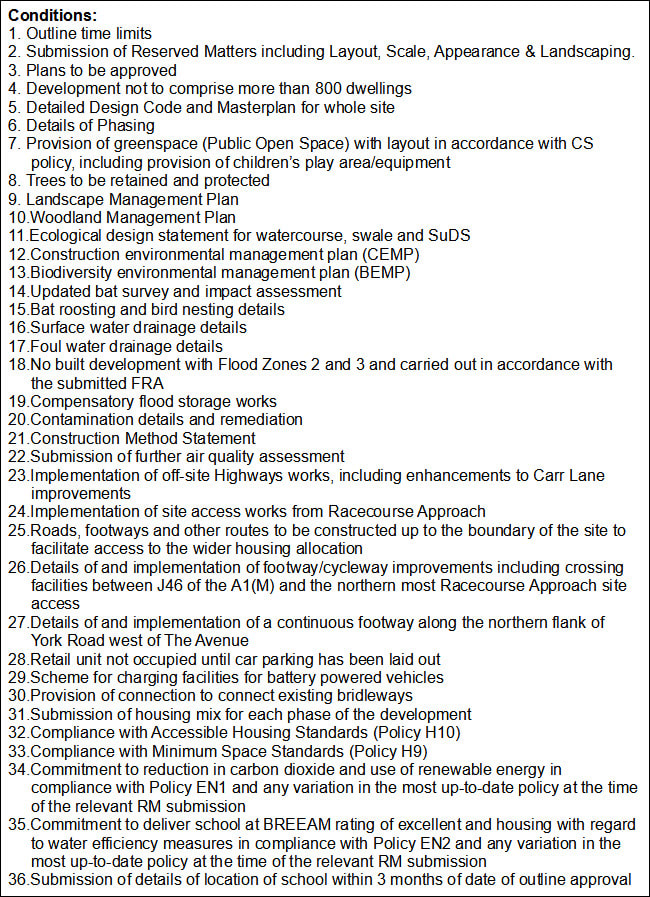 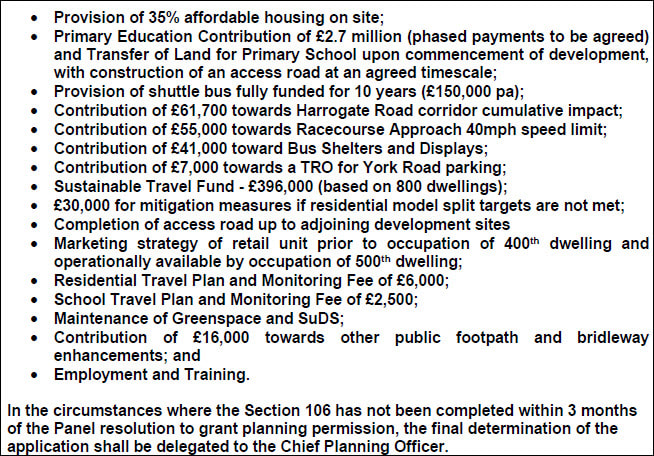 ​Better Wetherby will continue liaising with Taylor Wimpey, Leeds City Council and other parties to ensure that this development is implemented in a manner that complements our town, rather than detracting from it.  We are encouraged by comments in the Planning Officers report and Decision notice such as: 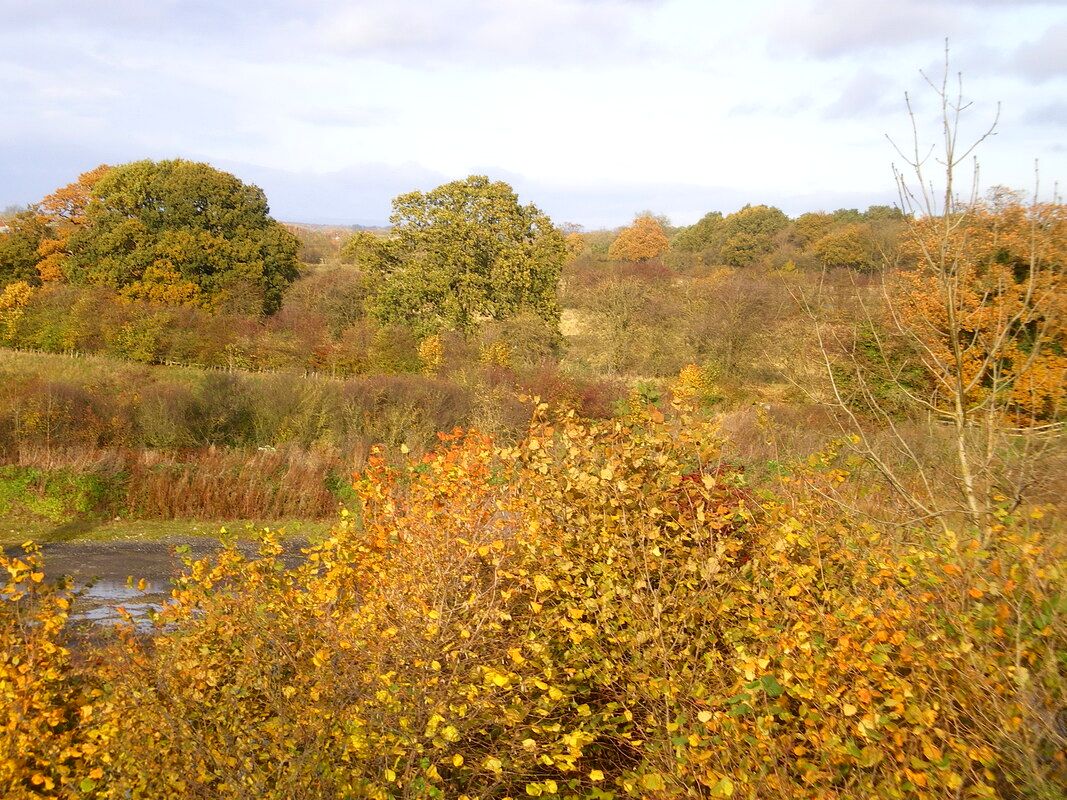 This application by Taylor Wimpey (TW) to build a development of 800 houses on the outskirts of Wetherby has been in the planning system for around 3 years. It has received consistent and strong opposition from BW and many local people and subject to scrutiny in several hearings by Leeds City Council Plans Panel (meeting of Councillors).  At a previous Plans Panel meeting, the application was approved subject to a number of conditions being met, including a key issue of ensuring that an access point was secured onto York Road on the south-western corner of the site.

In recent months representatives of TW have engaged in negotiations to purchase land to secure the necessary access point. As they have been unable to reach an agreement with the landowner, TW requested that this specific condition be removed and gave Notice of Appeal should their request not be granted. Leeds Planning Officers reported that they supported the removal of the condition, maintaining that other access points from Racecourse Approach would be acceptable.

At a lengthy meeting of the Plans Panel on 6th August, BW spokesperson, Ward Councillor Alan Lamb, pointed out that to allow the removal of the condition would be in direct conflict with the approved Leeds Site Allocation Plan (SAP). This would call into question the relevance of the SAP and undermine the whole ethos of the National Planning process. Councillor Lamb said that BW accepted that a development would take place on this site, as it was allocated in the Leeds SAP. However, as it would bring huge change to Wetherby, the biggest change for over 50 years, it was important to get things right. He maintained that the application in its current form was not right for Wetherby and asked that the application be rejected. Peter Catton, speaking on behalf of Wetherby Civic Society, also opposed the application. He contended that it failed to meet the requirements of the Leeds SAP, the National Planning Framework and the Wetherby Neighbourhood Plan.

Mark Johnson, representing TW, also addressed the Panel. He maintained that the removal of the condition was compliant with the SAP and that TW would be pressing ahead irrespective of the Panel’s decision. He confirmed that a notice of appeal was in the system. Mr. Johnson said that TW was hopeful that the design stage would be the time for consultation and engagement with those who were critical of the development.

Several members of the Panel expressed serious concerns about the application. However, in spite of those reservations there was a majority vote of 8 – 5 in favour of removing the condition about the access point and allowing the application to progress to the next phase in the planning process, that of the detailed design stage.

Whilst the outcome is a disappointment, it is the view of BW that it also presents an opportunity. It is accepted that a development on this site will take place, probably over a period of several years. Therefore the aim of BW is now to ensure that this becomes an exemplar housing development. BW is fully prepared to reach out and engage in a positive way with TW and Leeds Planning Officers to offer our views and advice during the detailed design phase. Local people can be assured that BW will be continuing our efforts, using the means at our disposal, to ensure that we achieve the best possible outcome for our town.

Serious concerns remain about this application. These include the site’s isolation, lack of public transport, adverse impact of increased traffic from the development adding to congestion, lack of parking spaces, road safety, and pressures upon already overstretched local services.
Racecourse Approach Update 10-July-2020
As we have outlined in previous newsletters, this application by Taylor Wimpey to build 800 new houses has been strongly opposed by BW during the various stages of the planning process. There have also been many individual objections from local people concerned about the negative consequences on Wetherby from the creation of such a massive development, see the Leeds CC planning portal or our website.
The impact of this development will be severe, particularly in terms of increased traffic and air pollution adding to the existing highways problems of the town, together with further strain on already overburdened schools, health services, local infrastructure and services. However, despite the strong grounds for objection, in August 2019, Leeds Plans Panel approved outline planning permission subject to certain conditions. One major condition was provision to allow access to the site from York Road. This was also a requirement from the Government Inspector, when approving inclusion of this site in the overall Leeds Site Allocations Plan (SAP).

The application is to be considered once again by the Plans Panel (meeting of Councillors) on Thursday, 16th July 2020. The current situation is that the developers, Taylor Wimpey, have been unable to reach an agreement to purchase some land which would allow vehicular access to the site from York Road. This access point is important and one of a number of conditions imposed on the developers by the Plans Panel. In short, the conditions have to be met before they can start building. Taylor Wimpey maintain that they have made a reasonable offer for the land and, as they have not been able to persuade the landowner to sell, they now wish the condition to be removed. The company has served a Notice of Appeal which may result in a Public Inquiry if the Plans Panel do not support the removal.
In their report before the Plans Panel, Leeds Planning Officers now state that there is no technical evidence to demonstrate that the absence of vehicular access at this point in York Road would be detrimental. They suggest that other access points from Racecourse Approach itself are acceptable. It is evident from the report that Planning officials are concerned that Leeds City Council is in danger of losing an Appeal by Taylor Wimpey and costs incurred by the Council in such a process could be considerable.

On being informed about this latest twist in an already protracted application, BW convened an urgent Steering Group meeting to discuss the situation. Representatives of BW will be attending the Plans Panel meeting and we are currently working in liaison with our Ward Councillors to engage with Leeds City Planners to try to resolve various issues in advance of the meeting. One of these issues relates to making representations at the meeting. In normal circumstances, objectors are given a few minutes to outline their specific reasons of opposition. In this case, the Planning Officers report states that as there are no new material issues, there are no grounds to allow public speaking at this meeting. This statement is in direct conflict to letters sent to individual objectors which states they can speak at the meeting. We believe that BW and Ward Councillor representations are essential at the meeting and will seek to ensure this is allowed.
The issue of removing the condition about the access point in York Road is an important one. If the Plans Panel allow the removal of the condition, then it will be in direct conflict with the approved Leeds Site Allocation Plan (SAP). Such action will call into question the relevance of the SAP and will undermine the whole ethos of the planning process.
In the event of such an outcome, then BW will consider writing to the Secretary of State with a view to ‘calling in the application’ which could result in a Public Inquiry. Whilst we sincerely hope that this can be avoided, BW is prepared to proceed on such a basis and work to achieve a similar outcome as with our successful efforts stopping the Stockeld Park/Hallam development of 210 houses on the Spofforth Hill boundary. 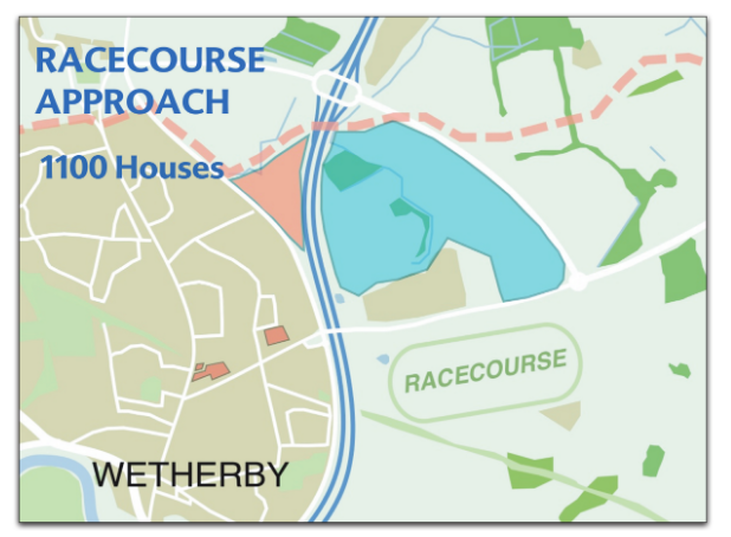 ​Racecourse Approach Planning Application
On Thursday, 29 August 2019, after a hearing lasting 3 hours, and in spite of the developer not meeting specified requirements from an earlier hearing, Leeds City Council Plans Panel considered the outline planning application by developers, Taylor Wimpey to build 800 new houses on land adjacent to Racecourse Approach, which forms the first part of an 1,100 houses development.

After the meeting, Peter Catton of Better Wetherby said “We won the battle today, but sadly we have lost the war. Our attractive and historic market town will be the poorer for this decision".

At a subsequent Planning Panel meeting on 30 January 2020, Taylor Wimpey sought to weaken the planning conditions on access from York Road. Better Wetherby members, Councillor Alan Lamb and Peter Catton, were successful in persuading the Panel to reject these changes unanimously and insist on the original conditions, as set out in the Leeds Site Allocation Plan and at the previous meeting, being met.

Recently the Leader of Leeds Council, Judith Blake, has stated in writing that “the outline planning application has yet to be determined” and that once further submissions have been received from Taylor Wimpey “we will be in a position to re-notify all interested parties in order that they have their comments”
Better Wetherby have submitted a number of comments regarding the Racecourse Approach Site.
A full list of documents related to this site can be found at Leeds CC - Racecourse Approach