​We have just (18 Nov 21) received a message from a team leader within the LCC planning department. He wishes to facilitate a meeting between BW, Bellway Homes and themselves to progress some of the issues mentioned below. We will keep you informed on progress.
Bellway Tree Belt - Update Nov 2021
BW have been lobbying for well over 12 months for action to complete the new landscape belt on the northern edge of the Bellway/Spofforth Park site, this was due for completion some two years ago. We are assuming that landscape plans published on the Leeds planning portal are the approved design, but LCC’s landscape architect has not confirmed this to us. The first stage of this landscaping work, addressing the Bridleway has just been completed, as summarised below. The second stage of grass seeding and, we hope, major tree and shrub planting has just started on site. 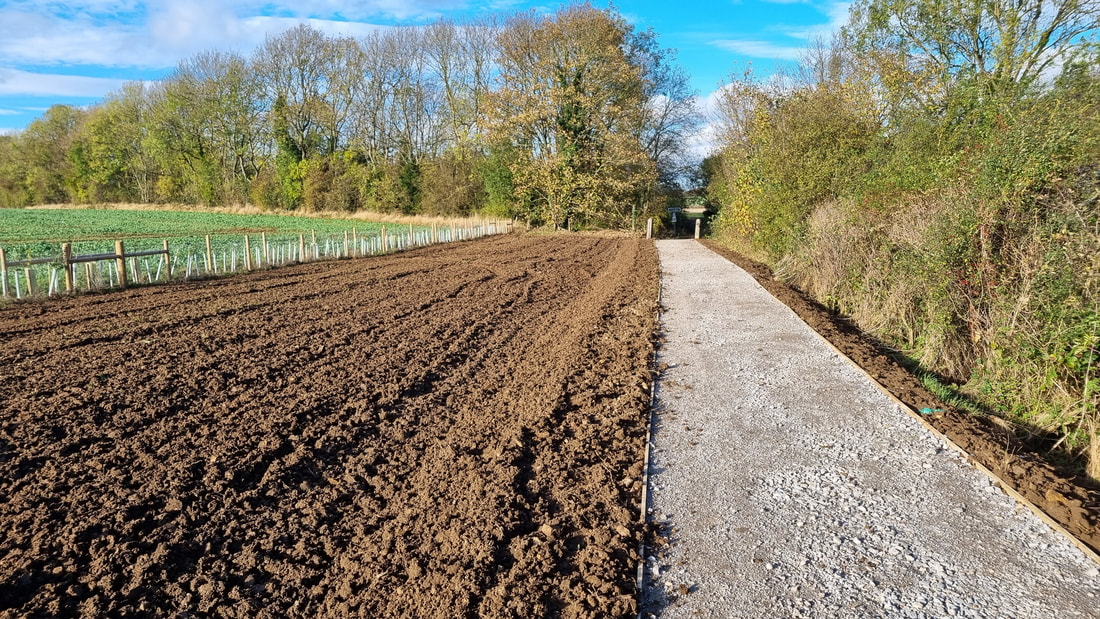 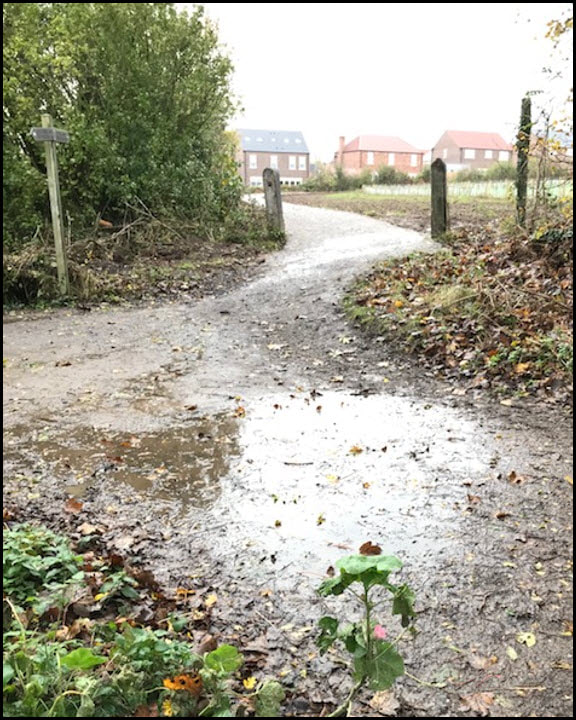 View of recent ‘flooding’ following resurfacing and drainage works
Improvement of Bridleway
Bellway's subcontractors have recently completed a limestone dressing on the bridleway running through the planned tree belt. Unfortunately, despite also installing a drainage system alongside this bridleway, very recent heavy rain resulted in excess run off into Harland Way, mirroring a similar state of affairs to that which happened this summer (see photo/video at bottom of this page). The downpour also eroded the new path especially at the entry point into Harland Way.

It was initially encouraging to see this bridleway resurfaced by Bellway in accordance with their planning conditions. There is however a 5 metre strip at the North Eastern end of the bridleway where it joins the track of Harland Way which has not been resurfaced. This has rendered it impassable for mobility scooters, and very difficult for cyclists/pushchairs etc. We, together with the Sustrans representative, also have concerns that the current ‘finish’ on this bridleway as it is not very suitable for cycling, and is potentially unsafe for mobility scooters.

​BW are continuing to seek a resolution of this situation; previous initiatives by ourselves have lead to good co-operation between Parks and Countryside officers at both LCC and HBC who own and manage Harland Way. Additionally, a representative from Sustrans, the national cycle group, liaises with the above officers and BW to provide advice and expertise.

BW believe that resolution to the excess run off should rest primarily with the landowner - Bellway Homes. Any resulting damage to Harland Way would potentially fall solely on the hard pressed budgets of LCC and HBC who are responsible for its maintenance. BW have put the above officers in touch with the LCC landscape officer who we hope will pursue Bellway to resolve the drainage problems.
BW acknowledged that there is a serious lack of staff resources within the LCC (and also HBC) planning department. This continues to lead to the lack of monitoring and enforcing of the terms and conditions of Bellway Homes planning consent. As the lead authority, LCC are expected to ensure the above compliance, even though the landscaping scheme land is within Harrogate District. Furthermore, the Right-Of-Way officer at North Yorkshire County council, has stated that the resurfacing and future maintenance of this bridleway is a matter for LCC to resolve. It is still not clear that LCC have ensured that the Bellway planning consent requires them to permanently maintain this part of the bridleway hard surfacing. 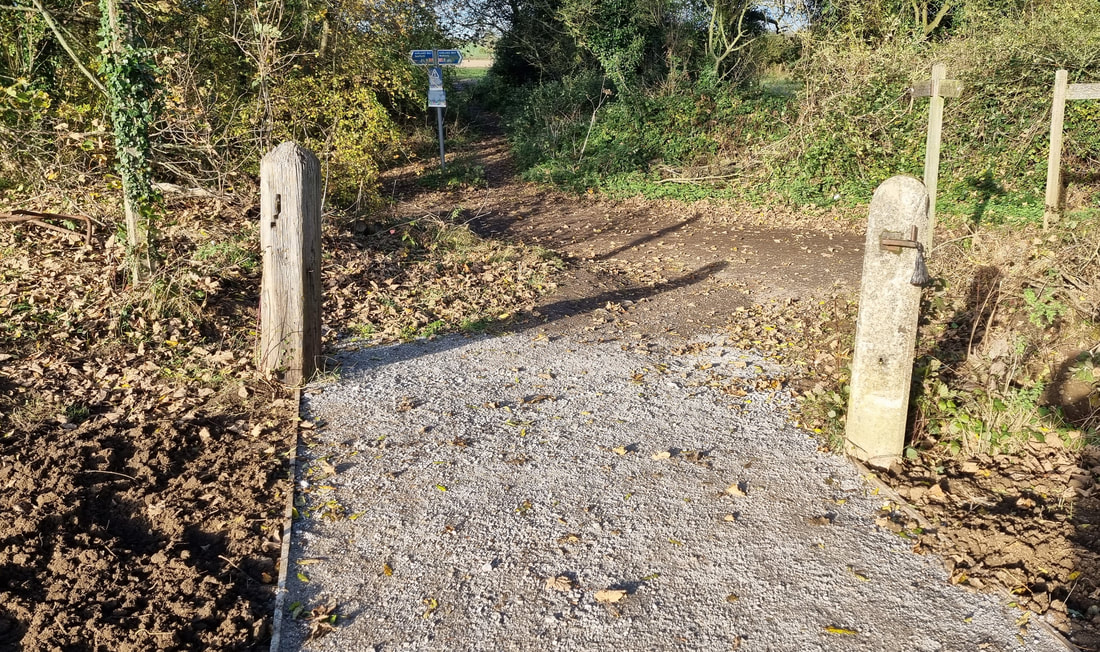 View of unfinished junction of new resurfaced bridleway and Harland Way track
Maintenance of the Landscape buffer
There is specific provision within the planning consent for LCC to confirm that the Landscape buffer has met with their approval – prior to Bellway vacating the Spofforth Park site. BW will continue to press for clear answers as to how the completed landscaping scheme will be approved by LCC.
We have also been concerned as to the longer term future of the tree belt. We understand from recent discussions with the Bellway site manager that the management company, RMG, will take on long term responsible for the landscape buffer, alongside their maintenance of the green spaces within Spofforth Park.

Why is this landscaping scheme so important:
BW believe that this “landscape buffer strip” is critically important in restricting further urban growth into the agricultural countryside area between Wetherby and Spofforth. This ‘tree-line’ was one of the principal reasons that Stockeld Park were refused planning permission on the adjacent site in 2020– any diminution of this dividing line could increase the likelihood of future applications for development of the adjacent land. Additionally any new ‘green’ tree belts provide valuable wildlife corridors and assist in the maintenance of biodiversity.
It is interesting to note that Councillor Tim Myatt, cabinet member for planning at Harrogate Borough, recently referred to this site in an article about the importance of green belts for preventing urban sprawl. BW have long been campaigning for the current green belt boundary to be extended north of Harrogate Road and around Kirk Deighton to achieve the above protection.
​
Stock proof fence
The plans for the buffer strip include a stock proof fence on its western edge. This was implemented in June 2021, apparently by Stockeld Park contractors. The stock proof fence incorporates hedge planting, at the same time a similar fence was constructed to the North-West, beyond the field that was refused planning permission in 2020, .alonside the bridleway through Kingbarrow Farm. It appears that the hedge planting adjacent to Bellway estate has not been particularly successful, with many of the shrubs showing little sign of life. This state of affairs has also been raised with LCC's landscape architect. Conversely the fence line on the far north western edge of the field, alongside Kingbarrow Farm, appears much more healthy and potentially might be the basis of a new landscape buffer which could be used to weaken any future resistance to planning applications for housing.


Removal of “temporary” concrete and tarmac access road
A further ‘gap’ in the landscape buffer is also apparent at the south-western edge of Bellway Homes estate where a ‘temporary’ access road was built onto the A661/Spofforth Hill during the early stages of development. LCC’s lack of detailed assessment of the planning application failed to recognise this section as important and did not insist on either completing the landscape buffer or removing the temporary access in this area. We do have concerns that this access road could potentially service new residential properties, and thus ‘invite’ a future housing application.
We are again caught between competing councils as this works access road is within Harrogate/North Yorkshire District. BW understand that formal planning permission was not granted by HBC for this road and we recently liaised with local HBC councillors to seek an enforcement order for its removal. HBC have declined to take such enforcement action because LCC Planners never included such removal in their planning condition terms back in 2016. HBC have also deemed that the route is an “historic farm access”.
We are now drafting a response to Harrogate, insisting that the current road is well beyond that of 'an historic farm track type access’, and that it constitutes development for which planning consent should have been applied for. 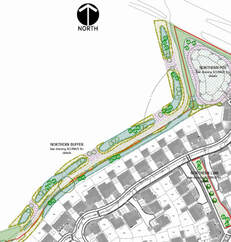 The Spofforth Park development of over 300 homes on Spofforth Hill is progressing rapidly and appears to be nearing completion.  BW have been maintaining a 'watching brief' on this development, in line with our commitment  to promote and protect our town's future. In this respect, we believe it is important to ensure to ensure that planning conditions imposed on the developer Bellway are completed. These conditions included a requirement to plant a major tree belt on the northern edge of their new estate, and to ensure that the bridleway on the Leeds/Harrogate border is maintained and resurfaced. This tree belt, allied to an existing spinney of trees on most of the remaining boundary, is aimed at ensuring that there will be minimal visibility of this new development over the very attractive rolling agricultural landscape on this gateway entrance into our town. A copy of the proposed buffer zone/tree planting is available here.

​Previous newsletters  have highlighted concerns about these outstanding matters: ​
Why is this Important?
The proposed major new tree belt will play a critically important role in preventing the encroachment of further housing onto the open countryside, which the Bellway new homes now overlook, by creating a natural boundary to the west of Wetherby. An application to Harrogate Borough Council to build on this open countryside was dismissed at appeal in February 2020 following a detailed submission by BW. The Planning Inspector noted that building houses here would have an adverse effect on the character of this open countryside (see Reasons, paragraphs 9-15 Inspectors report).

'Temporary' tarmacked access road - not identified by Leeds or Harrogate planners for removal. 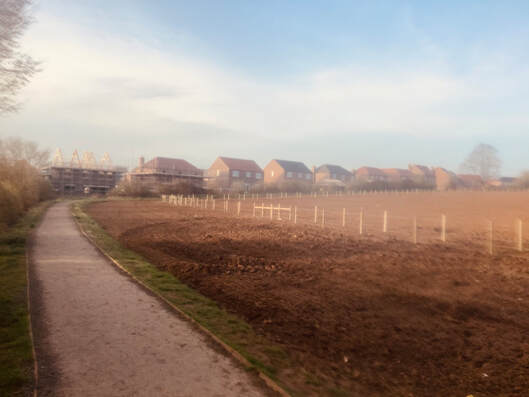 What has happened so far?
The bridleway was resurfaced in early 2019 but not to a high standard, the photographs at the bottom of this page depict some of the flooding issues.
Councillor Alan Lamb recently spoke with LCC Officers on behalf of BW, and as we now understand it, Bellway will undertake the necessary planting and resurfacing work later this year (2021). They have however suggested that they cannot complete the planting this (2020) spring planting season.

We are pleased to see there are at last signs on the ground that this work is now in hand. As the photo shows new fencing which defines the perimeter of this new tree belt has now been erected in the field running alongside the bridleway.
​
​
What happens next?
BW are now aiming to organise a joint meeting with Bellway and the recently appointed Spofforth Park Management Company to confirm the approved Landscaping Scheme and establish formal arrangements to monitor progress on the planting and bridleway completion.

BW will also be pursuing the extension of this tree belt to the western edge of the Bellway site on the A661. It would appear that this section of the site (the most visible one when approaching Wetherby on the A661) was not identified by the Leeds planners as requiring a tree buffer.  Planting of a buffer in this area would require removal of the 'temporary' tarmacked road used by Bellway during initial development of the site.  ​This 'road' lies within Harrogate boundaries and appears to have been constructed without any planning approval.
Harland Way Footpath problems related to Spofforth Park development

As discussed in our Jan2021 newsletter, BW are concerned about the state of a number of footpaths to the East of Wetherby.
​In particular, the intersection of Harland Way and the bridleway to the North/East of the new Bellway development is in a very poor condition as can be seen in the accompanying video and photographs.

​Leeds City Council planners, and the developers, have been informed - we expect action soon and will continue to monitor this and other rights of way in the area.