​In December 2019, representatives of Better Wetherby participated in a Public Inquiry in Harrogate which resulted in planning permission being refused for the building of 210 houses on Spofforth Hill and potentially extending Wetherby into North Yorkshire.  During the hearing, Better Wetherby worked in support of Harrogate Borough Council, to successfully contest the appeal by Stockeld Park and Hallam Land Management.
See below for full details....​ 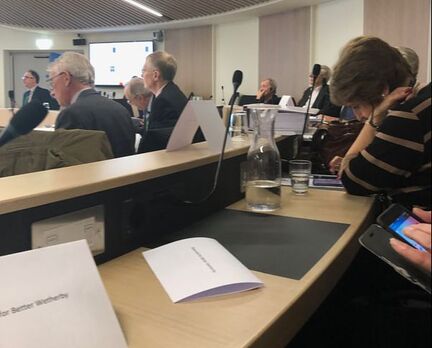 Latest News
Planning Permission is Refused
​Better Wetherby are pleased to annonce that planning permission has been refused!  The full report is available for viewing/download here
Alternatively you can view the full text here:

​The following comments were included in our latest newsletter

Peter Swales, Acting Chair of Better Wetherby commented:
‘‘We are immensely grateful that the Inspector has dismissed the Appeal. It has been evident for some considerable time that Harrogate Borough Council had an emerging local plan which fully met their housing needs until 2035. The fact is that the Stockeld Park development is not in that plan and is simply not needed by Harrogate to fulfil their housing needs – as was stated by Harrogate Borough Council themselves at the Public Inquiry last December. It is disappointing, to say the least, that the owners of Stockeld Park, appear to have little regard whatsoever to the serious and genuine concerns regarding the negative impact this development would have had on their neighbours in Wetherby and Spofforth”.

Paul Crossan, who headed representations for Better Wetherby at the Public Inquiry said:
The Inspector’s decision to reject the Appeal is extremely welcome. Better Wetherby has always maintained that it would be transformational and harmful to the landscape, character and local environment, contributing to a worsening of Wetherby’s existing highways, congestion and air pollution problems. Moreover, it would have placed considerable further pressures on our already overburdened schools, doctors and other local services. With this decision, the dreadfully adverse impact on Wetherby and our neighbours in surrounding villages has now been avoided. I wish to express my sincere thanks to all the local people who supported Better Wetherby in our efforts at the Public Inquiry.’ 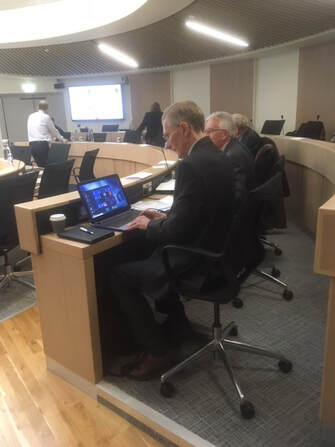 Public Inquiry update 17th December - A large delegation from Better Wetherby attended the start of the Public Inquiry. The Inspector, Mr. Bryn Bowker, outlined the process and timetable for the four day hearing. He said that he had already familiarised himself with the the site, but a formal site visit would be made during the Inquiry. He referred to specific issues of concern that would be dealt with during the Inquiry - landscape, highways, integrity of the Kirk Deighton Special Area of Conservation (SAC) and agricultural land.
Opening remarks were made by Andrew Williamson, Advocate for the Appellant, who made the case for the Appeal to be allowed. Opening remarks were then made by the Advocate representing the interests of Harrogate Borough Council, Stephen Whale. He said that the development will conflict with the emerging Harrogate Local Plan. Moreover, the Council already has more housing provision than needed. He added that the adverse impacts of the development would significantly outweigh the benefits. He invited the Inpector to dismiss the Appeal.
Paul Crossan, representing Better Wetherby, outlined concerns about the proposed development and the adverse consequences for Wetherby and surrounding villages if the Appeal was allowed. He referred to the pressures on the Town’s infrastructure, with schools already full to capacity and lengthy delays to get an appointment to see a GP. He said that the development would be largely ‘car dependent’ which would add to existing congestion, parking and air pollution problems in Wetherby.
(see here for full transcript of Paul Crossans opening statement)
The Inquiry then addressed Highways issues at length. The Appellants referred to traffic assessment surveys carried out in 2016 and in October 2019. These indicated that the effects from the additional cars from the 210 house development would not be severe. This view was challenged by Paul Crossan of Better Wetherby. He questioned the accuracy of the trip rates and traffic flows suggesting these were too low. Chris McIntosh of Better Wetherby pointed out that events and activities held at Stockeld Park had expanded significantly in recent years, resulting in considerably more traffic passing through Wetherby. He raised the question of whether this additional traffic had been taken into account in the surveys. It was confirmed that it had not been. The issue of sustainability and safety was raised, with Better Wetherby pointing out that no pedestrian crossing for the busy A661 is planned for the development. The infrequency of bus services, particularly during evening periods and weekends, was highlighted and noted, this again reinforcing the fact that those living on the development will be largely ‘car dependent’. Further points raised by Better Wetherby included the fact that there were no realistic options to mitigate the problems of congestion, lengthy tailbacks and traffic delays at the busy and often congested junctions in the centre of Wetherby.

Day 4 - 20th December  Planning conditions and obligations were the subject of discussions, primarily between Harrogate Borough Council and the Appellants, during the morning session.
Closing submissions were then made by Harrogate BC, Better Wetherby and the Appellants.
Stephen Whale, Advocate for Harrogate BC, invited the Inspector to dismiss the Appeal, outlining several specific reasons why this should be the case. The points of objection included the adverse effect and harms to the landscape character, loss of agriculture land and the fact that Harrogate BC had developed and submitted an emerging Local Plan well over a year ago and the appeal scheme was in conflict with it. Mr. Whale added that the emerging Local Plan had been the subject of hearing sessions that concluded in February 2019 and the Local Plan should be given significant weight. He emphasised that to allow the Appeal would be contrary to 'plan-led' planning and would undermine the detailed planning process.
Paul Crossan of Better Wetherby, endorsed the invitation of Harrogate BC to the Inspector to dismiss the Appeal. Mr. Crossan outlined concerns and objections regarding highways and transport issues, together with the adverse effects and harms to the landscape. He emphasised the point that Harrogate BC had developed an emerging Local Plan which demonstrated provision for housing and affordable housing needs, and that the Stockeld Park site was never a consideration in that plan. Some 500 new houses had either been built or were under construction in Wetherby and 800 more had recently been approved. He said that Leeds City Council object to the application on the grounds that it will severely and adversely impact on Wetherby, adding that Leeds CC already had an adopted Local Plan with housing provision to meet future housing needs.
Andrew Williamson, Advocate for the Appellants, requested the Inspector to allow the Appeal. He referred to the evidence given by several expert witnesses called by the Appellants to support their case in respect of highways/traffic impacts, landscape character, ecology and planning. Mr. Williamson maintained that overall, to allow the Appeal would provide much needed affordable housing in a sustainable location; be an appropriately planned extension to the major settlement of Wetherby; provide safe and convenient means of access to the highways network and not cause sufficient harms to other interests, as to justify withholding planning permission.
The Inspector, Mr. Bowker, then closed the Public Inquiry.