PROPOSED DEVELOPMENTS
Two large developments are subject to ongoing planning applications.
Stockeld Park / Spofforth Hill planning application.
A protracted planning application to build 210 new houses on the North Yorkshire side of the boundary with Wetherby was once more the subject of a hearing by Harrogate Planning Committee on 17th September 2019.
Having attracted well over 300 objections, it was initially rejected by the Planning Committee in August 2018. However, just a few weeks later on 25th September, the application was taken back before the Committee who overturned their initial decision and approved the application.
Since that time a great deal of effort has been made by Better Wetherby to have this decision reversed. As a result, Harrogate Planners reconsidered the situation and recommended rejection of the application. The Planning Committee voted unanimously on 17th September to accept this recommendation.
Hallam Land Management, the agents for Stockeld Park, have formally launched an appeal and the application will now be subject to a Public Inquiry in Harrogate starting on 17th December 2019.
Many local people attended the Planning Committee hearing, an indication of the strength of local feeling and opposition to the development. In thanking them for attending, Peter Swales, Chair of Better Wetherby said ‘Although the decision today is welcome, there is no room for complacency. It is particularly disappointing that Stockeld Park and Hallam Land Management are appealing the decision. This will now result in an expensive Public Inquiry, prolonging the uncertainty and concern for local people in Wetherby and nearby villages.’
Mr. Swales added, ‘This development is unwelcome and totally unsuitable. It will transform and harm the landscape, character and local environment in a wholly negative way and will add to existing highways, congestion and air pollution problems in the town, as well as placing further pressure on already overstretched schools, doctors and other local services. ‘Better Wetherby will be continuing our efforts and working to support Harrogate District Council at the Public Inquiry to fight the appeal by the developers.’ 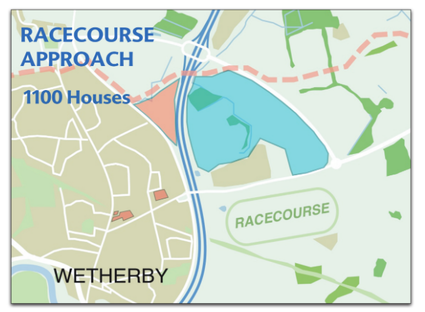 Racecourse Approach Planning Application
On Thursday, 29 August 2019, after a hearing lasting 3 hours, and in spite of the developer not meeting specified requirements from an earlier hearing, Leeds City Council Plans Panel approved an outline planning application by developers, Taylor Wimpey, to build 800 new houses on land adjacent to Racecourse Approach, which forms the first part of an 1,100 houses development..

After the meeting, Peter Catton of Better Wetherby said “We won the battle today, but sadly we have lost the war. Our attractive and historic market town will be the poorer for this decision.